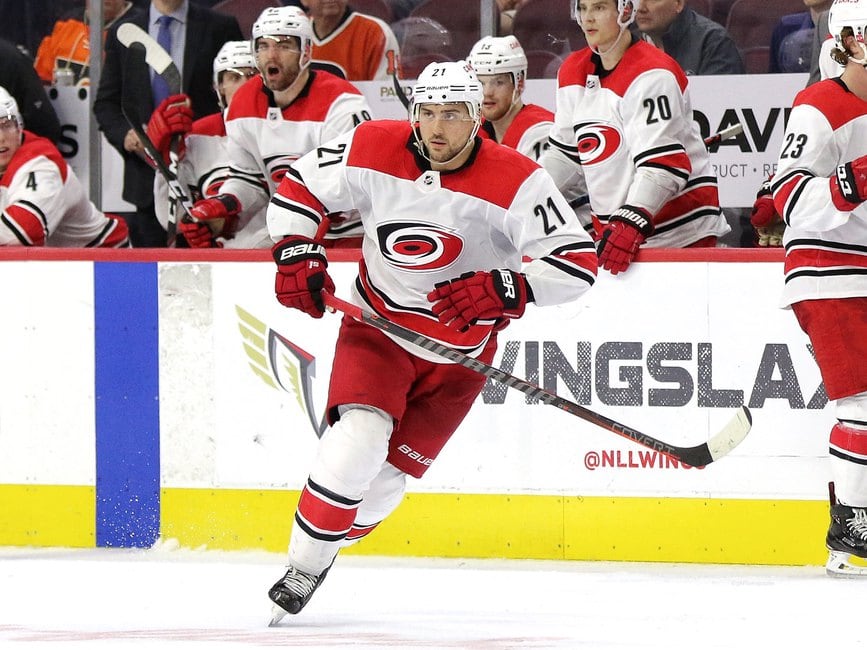 The NHL Expansion Draft is, somehow, one day away. It feels like yesterday that it was months away. Teams have finalized their lists of protected players and many are sure to be preparing trade offers for the Seattle Kraken. For the Carolina Hurricanes, the list was, for the most part, what fans and media expected to see – a team loaded with young talent across the lineup made protecting their still-open Cup window priority No. 1. Among those left exposed however, a few surprises are listed.

Among the current roster, Carolina boasts a wealth of young stars. Naturally, players such as Sebastian Aho and Jaccob Slavin, two of the best young players at their positions in the NHL, will be off-limits. Also of note, Jordan Staal has a no-movement clause in his contract, which made him an automatic selection for protection. 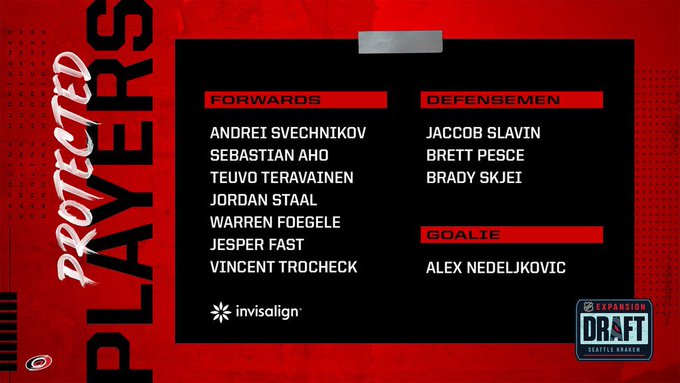 Notably missing is top-six forward Nino Niederreiter, who had a fantastic bounce-back year this past season. 34 points in 56 games in 2020-21 compared to 29 points in 67 games during the 2019-20 season was just what the team needed from the Swiss forward. He was clutch, scoring many timely goals. That is, until the playoffs came along. I don’t want to knock on Niederreiter as a player in the slightest; he’s been a phenomenal add for the Hurricanes during his (hopefully longer) time in Raleigh. That being said, his playoff production has left something to be desired when he’s playing top-six minutes at $5.25 million per year. Even with games missed due to injury, one point in the 2021 playoffs is just not cutting it.

Another move that surprised some was the selection of Brady Skjei for protection rather than Jake Bean. At the defensive end of the ice, Carolina has held a wealth of strong prospects for a long time. It’s safe to assume that this decision was a combination of “win now mode” and an acknowledgment of Skjei’s performance towards the end of last year, which was excellent. With a reasonable cap hit of $5.25 million, Skjei plays consistent top-four minutes, which is something Bean doesn’t do quite yet. There’s no disagreeing that Bean has the potential to be an excellent piece in an NHL lineup one day, but for a team looking at a still-open Cup window, exposing Bean (however tough it may be) is the right choice.

Also exposed from Carolina are goaltenders Petr Mrazek and James Reimer, both on expiring deals and both seemingly unlikely to go to Seattle. Morgan Geekie (who just re-signed this past week) is also available, but in all likelihood, Ron Francis’ choice will come down to Bean or Niederreiter.

What the Protected List Says About the Hurricanes’ Plans

The Hurricanes are entering an era where yearly contention for the playoffs and the Stanley Cup will be expected of them. The front office has acknowledged this through their expansion draft preparation. Protecting veteran players such as Skjei and Jesper Fast over younger, more unproven options shows a commitment to winning in the immediate future.

Should Bean be picked, which seems most likely as of now, the Canes will have lost both his services and Haydn Fleury’s within less than a season of one another. Both were budding young defensemen almost ready to make the jump to full-time NHL play, something the Hurricanes would now need to seek out given their pending UFAs.

Niederreiter will also be a tantalizing option for the Kraken. Most likely, this move is a chance for the Hurricanes to save the $5.25 million that he is owed in the upcoming season. While Niederreiter has been a fan favorite and a very reliable forward at most times, that kind of money gives the Hurricanes a chance to perhaps re-sign Dougie Hamilton, whose situation is still up in the air with the Canes. If not Hamilton, a free agent market loaded with talent at the forward positions could serve purpose to fill the hole in Carolina’s top six.

As soon as Francis was named general manager of the Kraken, it was easy to predict a solid player being taken from Carolina, his former team and employer. Fleury and Bean were both Francis-era draft picks; his familiarity with the two certainly means he considered both when drafting his first plans for the expansion draft. Niederreiter’s exposure is interesting and a possibility for the new franchise but in most cases, Francis takes Bean on July 21.

Losing any of the players exposed will be tough for the Hurricanes. Unlike in the Vegas Golden Knights expansion draft, it is all but guaranteed the Hurricanes lose a quality member of their NHL roster. Despite this, the team is committed to bringing the Stanley Cup back to Tobacco Road. If GM Don Waddell has shown anything over his tenure in Raleigh thus far, it is that he is always prepared.

Although I live in Norman, Oklahoma now, I brought with me a love for both ice hockey and the Carolina Hurricanes from my hometown of Raleigh, NC. Along the way, I’ve joined with the OCCC Pioneer newspaper, the OU Hockey broadcasting team and now The Hockey Writers to expand my experience while I complete my degree in Broadcast Journalism.

I’m an alumni of the 2016 Carolina Gold Drum and Bugle Corps and the 2018 Pride of Oklahoma.