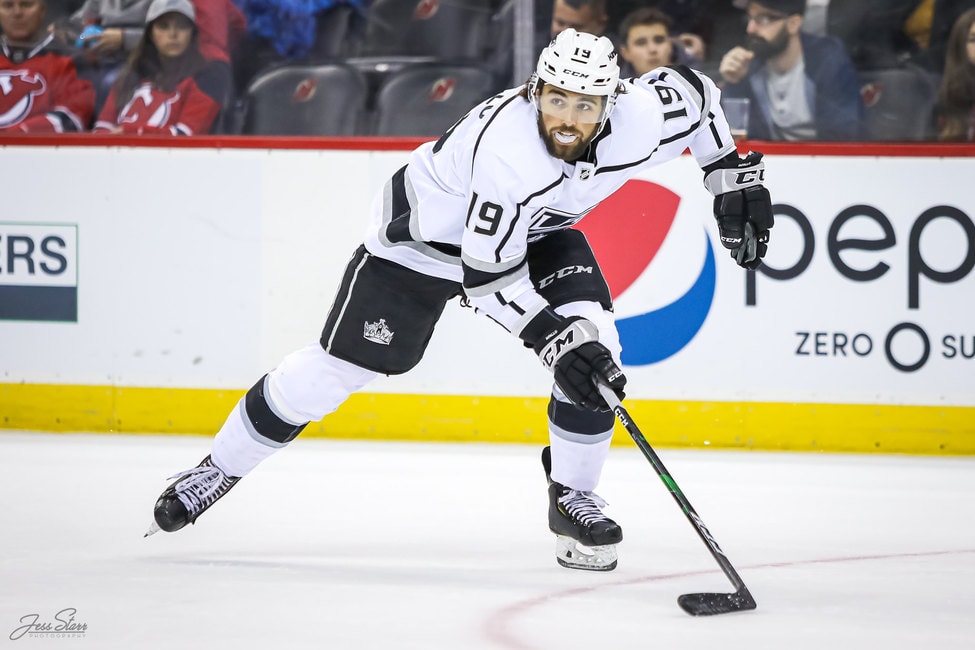 Over the last couple of weeks, there have been a number of trade rumors surrounding the Los Angeles Kings and Alex Iafallo. These rumors originated when Elliotte Friedman said on Tim and Sid that the Toronto Maple Leafs were interested in a specific winger. Friedman wrote down the name of this player on a piece of paper, and since then, many have been curious as to who that player could be. Considering the Maple Leafs’ salary cap situation and what they would be willing to move, it is possible that the player Freidman wrote down is Iafallo.

Alex Hobson of The Hockey Writers wrote a fabulous article on the possibility of an Iafallo trade from the point of view of the Maple Leafs, and I encourage you to read that article to get both perspectives. Prior to the start of the 2020-21 season, I listed Iafallo as a trade candidate, so there are certainly reasons to move him. He is serving as a first-line winger for the Kings, which is the main reason he was listed as such.

He had not produced first-line numbers in his career before the season started, and he will be an unrestricted free agent following the 2020-21 season. With the incredible group of prospects the Kings have, it looked like trading him this season wouldn’t be a bad idea. Upon further examination, though, there is more to consider when it comes to an Iafallo trade at this point in time.

Despite Iafallo’s successful career thus far, he was never drafted by any NHL team. Rather, he finished out his college hockey career with the University of Minnesota Duluth in the 2016-17 season. He had a great campaign, posting 21 goals and 30 assists, totaling 51 points in 42 games.

What the Kings Could Get in Return

When creating a hypothetical trade that includes the Maple Leafs, a key factor to consider is the salary of the players involved. With Toronto’s current situation, they are unlikely to accept a trade that would have them paying more money. One player who comes to mind that satisfies this requirement is Alexander Kerfoot.

Kerfoot was drafted by the New Jersey Devils in 2012, 150th overall. He made his NHL debut in the same season that Iafallo did, posting a solid 43 points in 79 games with the Colorado Avalanche. He went on to have a similar season in 2018-19, posting 42 points in 78 games. Before the start of the 2019-20 season, he was traded to the Maple Leafs, but he had a disappointing campaign, as he put up 28 points in 65 games. So far this season, Kerfoot has played 22 games for the Maple Leafs, posting 11 points.

Another player to look at is Pierre Engvall. He was drafted by the Maple Leafs in 2014, 188th overall. He entered the NHL last season, playing 48 games for Toronto and posting 15 points. He has not been able to match this production in 2020-21, as he has played 13 games for the Maple Leafs, only posting three points. He is partly of interest because he has played over 59 career games, so he will be required to clear waivers before being assigned anywhere. Considering this, the Maple Leafs may be interested in moving him.

Some other pieces could also fit into an Iafallo trade. The Kings would likely be able to get a second-round pick out of Toronto, but a first-round selection would be a difficult ask. There has been discussion surrounding 2021 draft picks having less value, as players are not able to be scouted as they were before the pandemic. This could give LA some bargaining power, but a first-round pick would still likely be a long shot.

Even though the Kings have arguably the best prospect pool in the league, it is never a bad idea to keep adding depth. Though they wouldn’t be able to get a top prospect in return, it doesn’t mean they couldn’t get a solid young player who could turn into something — Mikhail Abramov, for example. He was drafted by the Maple Leafs in 2019, 115th overall. He plays for the Victoriaville Tigres of the Quebec Major Junior Hockey League, where he has put up 16 points in 13 games this season. He is a playmaker with a great shot as well.

All of these pieces would not be included in an Iafallo trade, but they are some possible building blocks for a mutually beneficial deal between the Kings and Maple Leafs.

If the Kings were to move Iafallo to the Maple Leafs, Kerfoot would be the cornerstone of the trade as far as return for LA. Iafallo has been better this season as far as points go, but it is important to look past the basics and see what kind of impact each player has had for their respective teams.

Iafallo’s edge in goal scoring over Kerfoot is matched when it comes to their individual expected goals per 60 rates (ixG/60). Iafallo has posted an ixG/60 of 0.86 so far this season compared to Kerfoot’s ixG/60 of 0.7. Iafallo also gets the edge when it comes to his 5v5 expected goals for percentage (xGF%) of 51.19%. He takes this category by a significant margin, as Kerfoot has posted an xGF% of 44.61%. This means that when Kerfoot has been on the ice, the Maple Leafs have been to be outscored this season.

In terms of possession metrics, Iafallo, once again, comes out on top. He has posted a 52.47% Corsi for percentage (CF%) compared to Kerfoot’s 48.27%, meaning the Maple Leafs controlled the puck less than their opponent with Kerfoot on the ice. The discrepancies between the play of Iafallo and Kerfoot this season are further demonstrated by their regularized adjusted plus/minus (RAPM) comparison.

Iafallo has been significantly better than Kerfoot defensively, and though he hasn’t been phenomenal offensively, he has still been better than Kerfoot. As expected, he also comes out ahead of Kerfoot when it comes to overall impact. Wins above replacement (WAR) measures a player’s overall contribution to their team, and Iafallo has posted a wins above replacement per 60 rate (WAR/60) of 0.079 so far this season, whereas Kerfoot has put up a 0.072 WAR/60.

The statistics show that, so far this season, Iafallo has been notably better than Kerfoot. This is why if the Kings were to trade Iafallo to the Maple Leafs, they would need more than Kerfoot and a second-tier prospect. The question is: can the Maple Leafs give up more to get Iafallo, and if they can, will they? The Leafs don’t have a ton that they would likely be willing to part ways with, so the answer to that question is probably not.

Should the Kings Consider Trading Iafallo to the Maple Leafs?

The short answer is no. First off, since the beginning of his career, Iafallo has been on a consistent uptrend, while Kerfoot has been trending in the wrong direction over the last couple of seasons. There’s is no reason to trade away a player that puts up more points every season than the one before it for a player who might not have much of an effect offensively.

As previously mentioned, I listed Iafallo as a trade candidate for this season partly because he plays on the first line, and he hadn’t put up first-line numbers. Because the Kings are finishing up their rebuild and have an incredible amount of prospect in their system, losing a first-line winger didn’t seem so bad. Now, though, Iafallo playing on the first line is a reason to keep him around.

The Kings have been playing great hockey lately, contributing to their recent six-game winning streak. This has put them back in the race for the final playoff spot in the Honda West Division. Though not much was expected of the team before the season started, playoffs are looking like they could be a possibility. Rob Blake, the general manager of the Kings, spoke about playoffs being the expectation going into this season.

As far as playoffs… that’s what we expect to do.

As I’ve shown, trading Iafallo for Kerfoot and a pick or a prospect does not get the same roster player back. Kerfoot is not a first-line player, and while I’ve criticized Iafallo for not looking like one either, he has started to look like one this season. Blake and the rest of the Kings believe they can make the playoffs this season, and through the second half of February, they’ve played like it. Trading Iafallo to the Maple Leafs wouldn’t go along with the vision for this season. It might have been a good move for the rebuilding Kings, but that era will soon come to its close if it hasn’t already.

It has been established that the Maple Leafs are not the ideal trade partner for an Iafallo deal, but maybe the Kings shouldn’t look to trade Iafallo at all. LA doesn’t have any salary cap issues, so depending on what it would take to re-sign him, it might be more than worth it.

The future for the Kings is bright, featuring some of the most talented prospects in the NHL. The leaders of today’s team are on their way out, and LA is going to need a player to guide the team through the many playoff runs that are hopefully soon to come. Iafallo could be that player, so the Kings should hold onto him for now.