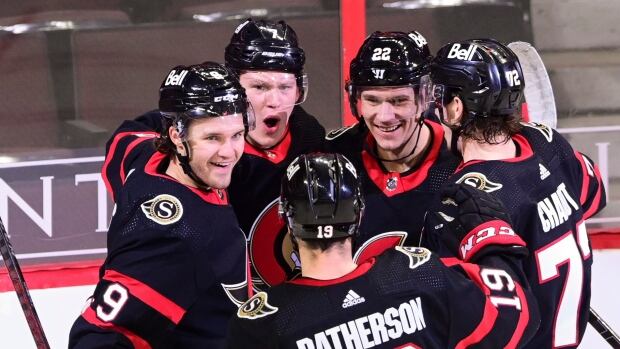 Brady Tkachuk scored the overtime winner to give the Ottawa Senators a 3-2 victory over the Montreal Canadiens at the Canadian Tire Centre in Ottawa Sunday night.

Rob Pizzo catches you up on the week that was in the all-Canadian division in the NHL. 3:48

Suzuki scored the game’s first goal one minute at 17 seconds into the contest. He wired a shot off the post and in the net past Murray. Josh Anderson picked up an assist on the goal.

The Senators tied the game eight minutes and 30 seconds later thanks to a goal from Batherson. As the forward drove to the net, he toe-dragged the puck before falling to the ice. As he fell, the puck lightly floated in the air and over Allen’s shoulder before it fell in the back of the net.

WATCH | 9 NHL facts that will make you feel old:

Rob Pizzo proves that for some of us, the saying “time flies” definitely includes the NHL. 2:13