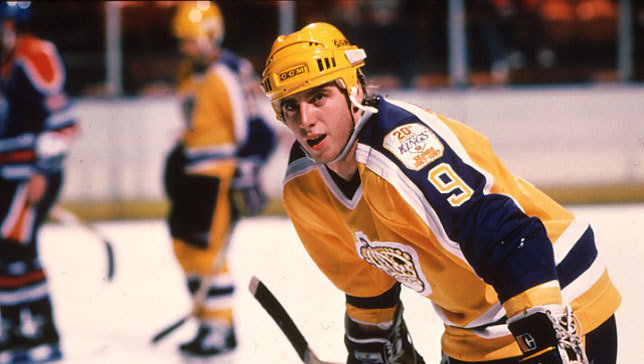 Jan. 19 has been a very interesting day in National Hockey League history. Players scoring their 200th career goal was an overwhelming theme of the day. Plus, there were some historic performances in Los Angeles and we saw one of the most memorable moments in All-Star Game history. Let’s hop in the THW hockey time machine for our daily look back.

Bob Nevin scored his fifth and final career hat trick, on Jan. 19, 1975, to lead the Los Angeles Kings to a 6-3 road win at the Montreal Canadiens. He became the first Kings player to score three goals in a game versus the Canadiens. The victory also moved Los Angeles past the Habs for first place in the Norris Division.

On Jan. 19, 1988, Bernie Nicholls became the fourth player in franchise history to score 500 points. His milestone came on a goal as the Kings erased a 3-0 second-period deficit to beat the New York Rangers 6-3.

Luc Robitaille racked up a hat trick, on Jan. 19, 2006, in the Kings 8-6 victory over the visiting Atlanta Thrashers. The three goals give 551 with the team, passing Hall of Famer Marcel Dionne for the most in franchise history. He retired at the end of this season with 557 goals with the Kings, which are still the all-time record.

Big Date Behind the Bench

Dick Irvin became the first man in NHL history to coach 1,000 NHL games, on Jan. 19, 1950, when his Canadiens lost to the visiting Toronto Maple Leafs 4-2. He retired following the 1955-56 season with 1.448 games coached, the eighth-most in league history. His 691 wins are 10th on the all-time list and he is one of only six coaches to win four Stanley Cups.

Minnesota North Stars general manager Wren Blair took over as head coach, on Jan. 19, 1969, replacing John Muckler after a 6-23-6 start to the season. This Muckler’s first head coaching job and he would not get another until the 1989-90 season when he led the Edmonton Oilers to the Stanley Cup.

Vancouver Canucks’ general manager Harry Neale fired head coach Roger Neilson, on Jan 19, 1984, and moved behind the bench. Neilson went 51-61-133 with the Canucks, but took them on a memorable run to the 1982 Stanley Cup Final. He was hired by the Kings 11 days later.

Jacques Demers got his 400th victory, on Jan. 19, 1999, as the Tampa Bay Lightning ended an eight-game winless streak by beating the Buffalo Sabres 2-1. He became the 12th coach in NHL history to join the 400-win club. His first 350 wins came with the Quebec Nordiques, St. Louis Blues, Detroit Red Wings and Canadiens.

Exactly one year later, Pat Burns became the 14th coach in NHL history to win 400 career games, when the Boston Bruins beat the Thrashers 4-3. He went on to win 501 games before his career came to end. He coached the Canadiens and Maple Leafs before arriving in Boston before spending his final two NHL seasons with the New Jersey Devils.

Four players scored their 200th career goal on this date, starting on Jan. 19, 1958, with Bernie Geoffrion. The future Hall of Famer scored two goals and picked two assists in the Canadiens 6-2 win in Boston. He became the sixth player in franchise history to score 200 goals.

Peter Stastny scored twice in the second period, on Jan. 19, 1985, to give him 200 career goals. He also added an assist, as the Nordiques won 4-3 over the visiting Bruins.

On that very same night, Denis Savard scored twice his admission into the 200-goal club. He also added an assist as the Chicago Blackhawks beat the Red Wings 6-4.

San Jose Sharks goaltender Evgeni Nabokov got his first NHL start, on Jan. 19, 2000, and made 39 saves for a shutout. Unfortunately, he did not get the win as the Sharks and Colorado Avalanche skated to a scoreless tie. Patrick Roy made needed just 15 saves for his 47th career shutout.

In New Jersey, Patrik Elias scored two goals and added an assist in the third period to lead the Devils to a 4-1 win over the Blackhawks. He tied a franchise record with at least one point in 12 straight games.

Franklin Field in Boston was the site of the first record U.S. collegiate hockey game, on Jan. 19, 1898, as Brown defeated Harvard 6-0. These two Ivy League schools have since played 174 times with Harvard leading the series going 114-46-14.

On Jan. 19, 1978, the New York Islanders improved their all-time record to over .500 for the first time in the team’s six-season history. Billy Smith earned his 10th career shutout in a 3-0 win over the Blues.

Doug Gilmour recorded his 300th career assist, on Jan. 19, 1990, as his Calgary Flames skated to a 3-3 draw with the Hartford Whalers.

The Chicago Stadium and the Blackhawks hosted the 1991 NHL All-Star Game, on Jan. 18. 1991; the day the rest of the hockey world learned about the national anthem in the Windy City. Just a couple of days after the United States invaded Iraq as part of Operation Desert Storm, Wayne Messmer’s version of the “Star Spangled Banner” took on a whole new feeling. The walls of the old barn shook as the fans cheered along.

Once the puck dropped, Vincent Damphousse of the Toronto Maple Leafs took over. He scored four goals, matching an All-Star Game record. He was named the game’s Most Valuable Player in the Campbell Conference’s 11-5 win over the Wales Conference. Wayne Gretzky scored his 11th career All-Star Game goal, passing Howe for the most all-time.

Phil Housley extended his team-record assist streak to 14-straight games, on Jan. 19, 1993, in the Jets’ 5-2 win against the visiting Blackhawks. The future Hall of Famer recorded 21 assists during his streak.

Three years later, the NHL Board of Governors approved the sale of the Jets. This was the last hurdle that needed to be cleared in order for the team to relocate to Phoenix, where they took the ice as the Coyotes at the start of the 1996-97 season.

Dominik Hasek became the first goaltender to record 50 shutouts in Sabres’ franchise history, on Jan. 19, 2001, with a 1-0 win against the Florida Panthers.

On Jan. 19, 2003, Nicklas Lidstrom became just the second defenseman, and fourth player overall, in Red Wings history to play 900 games. He picked up an assist in Detroit’s 4-1 loss to the visiting Canucks.

Milan Hejduk became the third player in league history to score an overtime penalty-shot goal, on Jan. 19, 2004, to give the Colorado Avalanche a 5-4 victory over the Lightning. This came just eight days after he scored his first career penalty-shot goal against the Blackhawks.

On that same evening, the late Pavol Demitra scored twice, including the game-winner in overtime, as the Blues won 2-1 at the Panthers. The two goals gave 500 career points in his 525th NHL game.

Henrik Lundqvist made 27 saves, on Jan. 19, 2019, to lead the Rangers to a 3-2 win at the Bruins. This gave him 446 career wins, moving him ahead of Terry Sawchuk for sixth place on the NHL’s all-time victories list. Mika Zibanejad tied Rod Gilbert’s team record by scoring the game-winning goal in the third straight game.

Happy Birthday to You

A total of 24 current and former NHL players have been born on Jan. 19. The most recognizable names of the lot are Sylvain Cote (55), Ian Laperriere (47), Mike Komisarek (39), Thomas Vanek (37), Johnny Boychuk (37) and the late Hall of Famer Busher Jackson.