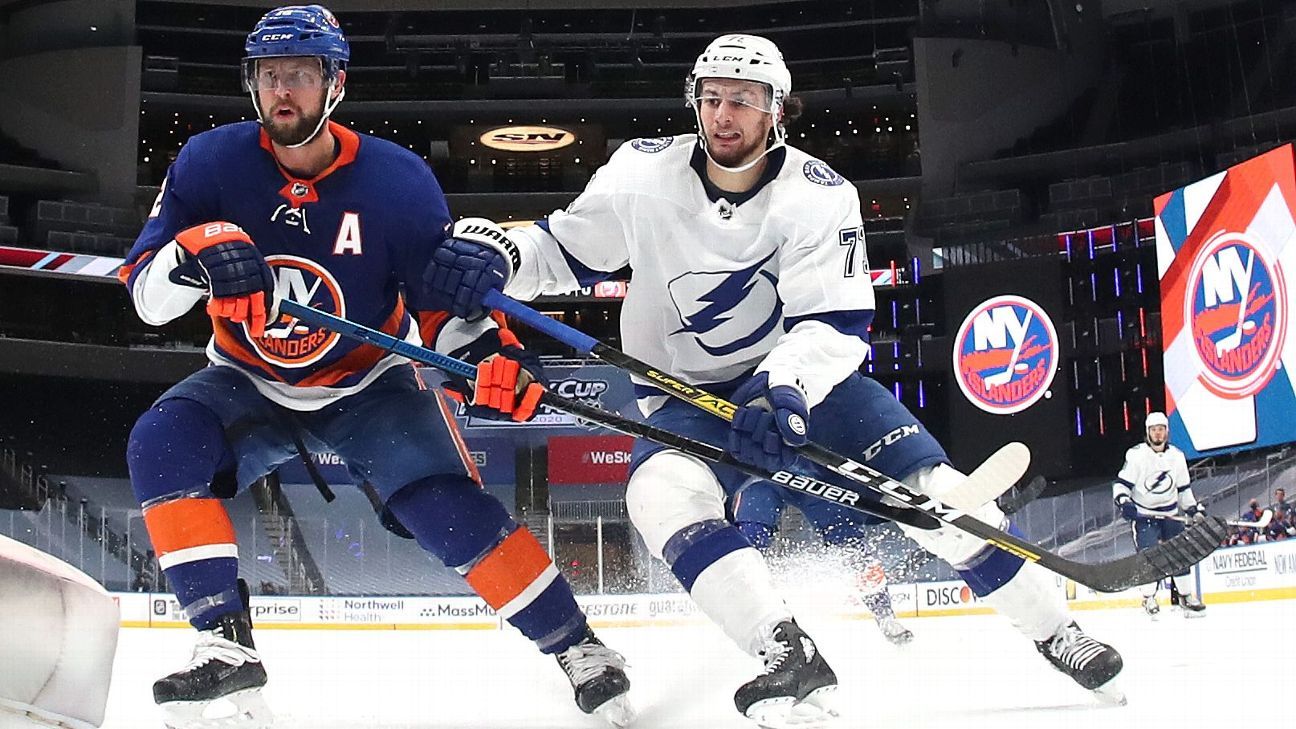 The Dallas Stars will play for the Stanley Cup after eliminating the Vegas Golden Knights in Game 5 of the Western Conference finals. The Tampa Bay Lightning can join them if they do the same to the New York Islanders in Game 5 of their series on Tuesday night.

Check out ESPN NHL Playoffs Today every day of the postseason until the Stanley Cup is handed out in October.

More: What the Golden Knights should prioritize this offseason to get better.

Question of the day: Can the Islanders rally?

“It’s all about focus. We’ve done it all the way through the playoffs. Focus on the moment,” said Islanders coach Barry Trotz. “And have fun doing it. There are 27 teams and 700 players that would love to be in this position.”

Trotz said that the Islanders are a team that has “no quit,” and expects their best in Game 5. “Right now, we’re playing a team that can execute as a very high level,” he said. “We’ve got one life left. We have to earn the right to keep playing.”

More: Four areas the Islanders need to improve in order to come back in this series.

One point of concern for the Islanders: The play of their top line. Anders Lee and Jordan Eberle are scoreless in their last three games. Mathew Barzal has one assist in that span. Barzal said that while the Islanders’ possession has been good in the offensive zone, his line hasn’t generated enough high-danger chances. But they’re also a minus-6 in scoring chances in their last three games vs. the Lightning.

Trotz said that with that group struggling, he’s mulled breaking them up for Game 5. “We’re considering that for sure,” he said. “One of the things you have to understand, and this is part of the growth of a young player, is that there are times when it’s not going your way, there are so many other ways you can contribute. Just in the details and the focus that you have to play with.”

Bet of the day

“It’s a feeling you can’t describe,” said Dallas coach Rick Bowness, who watched forward Denis Gurianov score at 3:36 of overtime to give the Stars a 3-2 come-from-behind victory in Game 5, eliminating the Golden Knights from the postseason. Dallas advanced to the Stanley Cup Final for the first time since 2000.

Stay up to date with scores, schedule, team updates and much more.

Vegas forward Reilly Smith gave the Knights a 2-0 lead with a goal just 15 seconds into the third period. But third-period goals by Jamie Benn and Joel Kiviranta — the hero of Game 7 of the semifinal round — sent the game into overtime. Once there, a delay of game penalty by Vegas defenseman Zach Whitecloud led to the Dallas game-winner. Goalie Anton Khudobin (34 saves) outdueled Robin Lehner (23 saves). “We all feel like this is a wasted opportunity,” said Smith after the game. Full recap.

The Stars rookie now has nine goals on the postseason, after his one-timer in overtime beat Robin Lehner for the series win. He also assisted on Joel Kiviranta‘s game-tying goal.

Khudobin made 34 saves for Dallas to complete a tremendous series against the Golden Knights. “Once again, he kept us in it as long as we needed, and we found a way to get it done,” said Dallas captain Jamie Benn.

The Knights center scored the game’s first goal on a breakaway against Khudobin. The Knights were 10-2 in the playoffs when scoring the first goal. Alas, for the second time in this series, they lost after opening the scoring.

Quote of the day

“I just feel terrible for the kid. It’s such a s—ty penalty to begin with. For that type of penalty to decide a game just doesn’t make sense to me. But for him, he’s got nothing to hang his head about. He played his ass off. He’s got a bright future ahead of him here.” — Golden Knights coach Peter DeBoer on rookie defenseman Zach Whitecloud, whose delay of game penalty in overtime led to the Stars’ winning goal.

The rallying cry of the Dallas Stars? “We’re not going home!” We liked this version from goalie Anton Khudobin in their celebratory locker room.

Celebration of the day

ALL OF US RIGHT NOW pic.twitter.com/vP1bkVK58r

Rick Bowness took over coaching duties for the Stars on an interim basis in Dec. 2019 after head coach Jim Montgomery was fired for “unprofessional conduct.” The oldest coach in the NHL at 65 years old, Bowness showed some youthful exuberance on the Dallas bench when they won Game 5 in overtime.