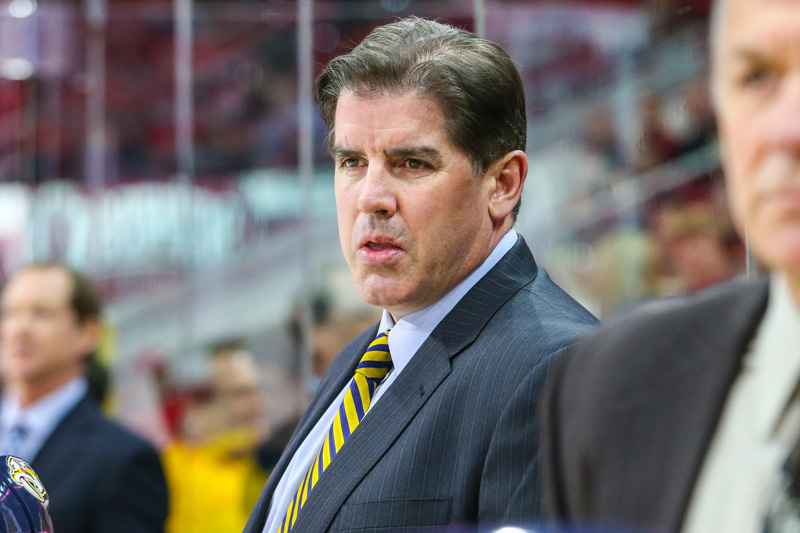 The Washington Capitals have hired Peter Laviolette as their next head coach.

Laviolette’s contract will be for three years and see him paid nearly $15 million over the term, Pierre LeBrun reports.

Laviolette take over for Todd Reirden, who coached the Capitals for the past two seasons but was dismissed after his squad fell to the New York Islanders in the first round of the playoffs last month.

Two seasons removed from winning the Stanley Cup, the Capitals have been inconsistent and have made two first-round exits, with Reirden unable to maximize the talent at his disposal.

After dismissing him Reirden last month, Capitals general manager Brian MacLellan expressed concern their “team game” was deteriorating and said he was looking “experienced coach” and “someone who can come in and push some buttons.”

MacLellan has his man in Laviolette.The 55-year-old comes to D.C. with more than 1,200 games coached over nearly 20 years and a Stanley Cup ring on his finger.

The Massachusetts native most recently spent five-and-a-half seasons as the head coach of the Nashville Predators, but was fired back in January.

Prior to that, he was the bench boss of the Philadelphia Flyers, where his fiery temper and his preference for intense play made him a fan-favourite, the Carolina Hurricanes — whom he coached to a Stanley Cup championship in 2005-06 — and New York Islanders, where his NHL head coaching career began in 2001-02.

Prior to being a coach, Laviolette had a lengthy minor league career in the IHL and AHL as a centre and also suited up for 12 games for the New York Rangers in 1988-89.