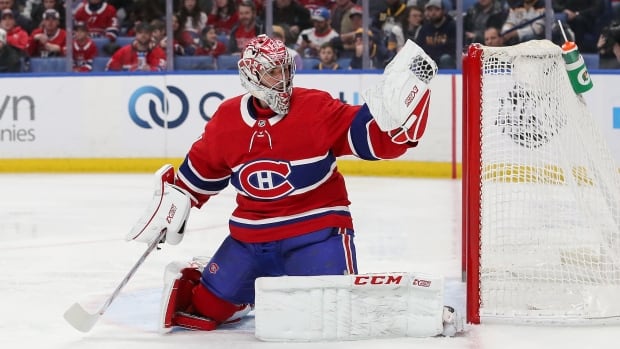 Carey Price learned first hand how dangerous contracting COVID-19 can be when his friend’s mother died recently after catching the virus.

“It’s nothing to balk at. It’s a very serious situation,” he told reporters Thursday by phone from the state of Washington, where he has been isolated with his family since the NHL went on hiatus in mid-march.

“Hopefully we can learn from this and prepare as much as we can. There’s no doubt we’re going to have another [wave] at some point,” he said.

Price said before he agrees to get back on the ice with his teammates to compete for the Stanley Cup this summer, he has a lot of questions he needs the league to answer.

“Health and safety is the biggest: being able to come to a situation where you don’t have to worry about contracting COVID-19 is huge,” Price said.

The NHL and the players association have so far agreed on the structure for the return to play plan, but many other aspects still need to be negotiated.

The league has proposed hosting the players from 24 participating teams in hub cities in an isolated social bubble while they play down for the Stanley Cup, but details such as which cities they’d play in and how the bubble would work have yet to be ironed out.

Price thinks there’s a 50-50 chance of the two sides coming to an agreement.

“I have about an equal amount of optimism and pessimism,” he said. “It’s a very unusual situation. I want the opportunity to play for a Stanley Cup, but I want to be able continue living life normally.”

He said if a teammate or anyone else in the organization doesn’t feel comfortable participating in the NHL restart plan this summer, he would support their decision to stay home.

“I would have nothing but respect for that person. That’s a very difficult decision to make,” Price said.

For Price, growing family is top of mind

Carey Price and his wife Angela have two young children and a third on the way.

So for the Habs star goaltender, being isolated in a social bubble with his teammates but away from his family for an extended period would be a tough sacrifice.

“It would be difficult to leave our families, no question. It’s definitely a commitment to go long term without seeing your children, especially for me — it’s the age of their lives where they’re growing so quickly,” he said.

He doesn’t anticipate that his wife and children, aged one and four, would join him in the bubble even if they were allowed.

Price said right now, he’s training alone at the Tri-City American facility in Kennewick, Wash. He says he’s getting some skating done but hasn’t found anyone with NHL-level skills to shoot the puck at him.

He hasn’t made any firm plans to return to Montreal yet, although he’s looking into it because players are expected to be back with their teams for a training camp scheduled to begin July 10.

A ‘chaotic’ restart could work in Habs favour

If the NHL restart plan goes ahead, not many analysts are giving the Habs much of a chance to win the Stanley Cup.

But if they are going to go on a run, Carey Price is key to making it happen.

“I know we’re an underrated team. We’re a streaky team, and we’ve proven that we can get really hot, and that’s what it’s all about in the playoffs,” Price said.

The Habs were 24th in the NHL standings when league play was suspended, and general manager Marc Bergevin was clearly planning for next season as he traded away veteran players such as Ilya Kovalchuk and Marco Scandella before the trade deadline.

Still, Price thinks the format, which expanded the playoffs from 16 to 24 teams, is an opportunity for his squad to surprise some people.

“We’re fresh. You always see at the start of the season how it’s kind of chaos, but I feel that returning right back into the playoff format, right off the get-go, it’s going to be chaotic,” Price said.

Throughout Price’s career, the Habs have often started the season with a strong first month, before injuries or other issues derailed them.

Price says he’s well-rested after months of isolation, and he’s personally motivated to play well, knowing how much is expected from him.